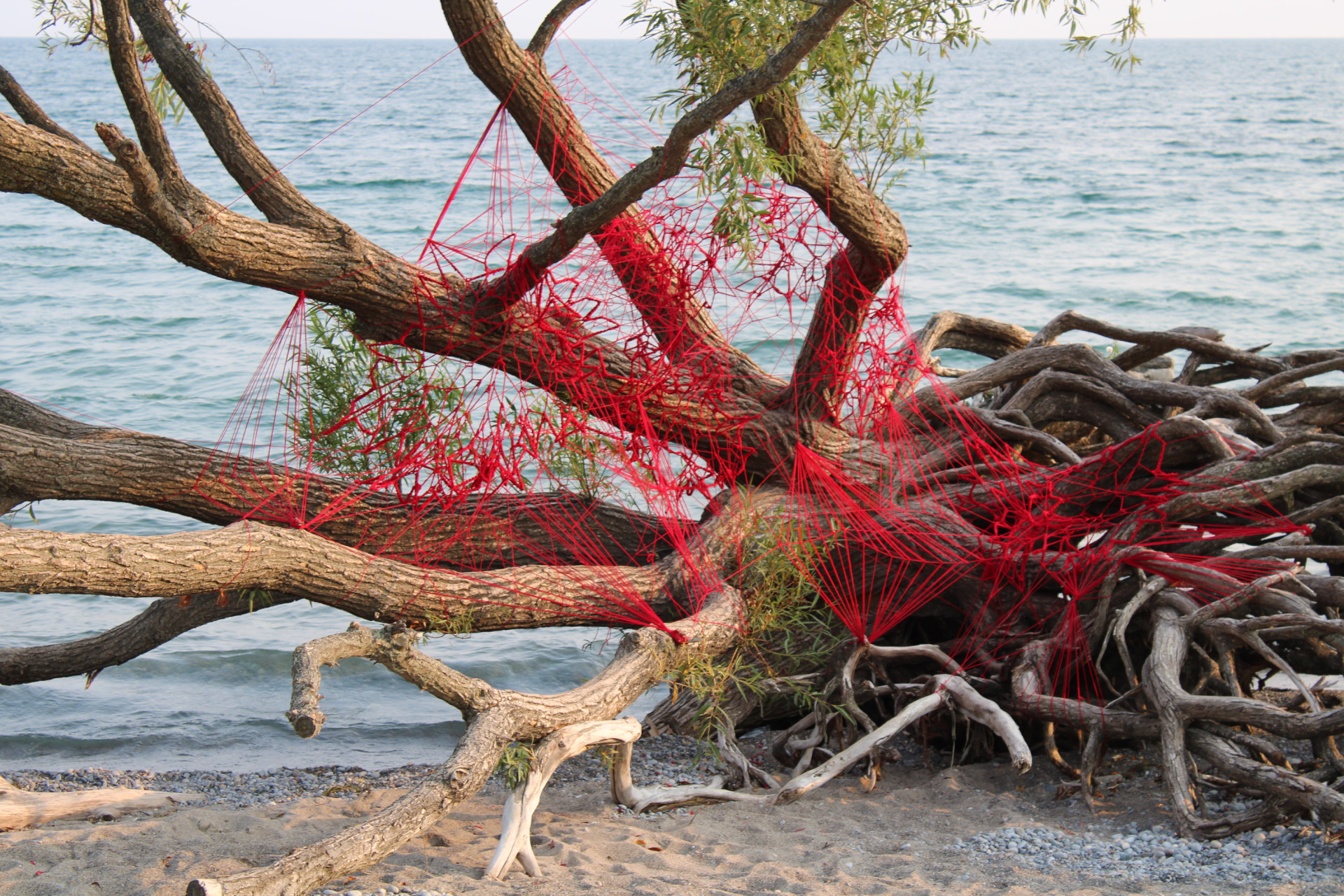 Tracey-Mae Chambers, Hope and Healing Canada. Hosted by the City of Pickering, August 2021. Image courtesy of the artist.

A growing series of nearly 40 installations conducted across Ontario, Hope and Healing Canada responds to the COVID-19 pandemic and its devastating effects on our society and connectedness with one another. Reflecting on the past 18 months, the artist asks, “How do we pick up the pieces of our lives individually and collectively? How do we heal and stay hopeful?”

By weaving and knotting thousands of metres of red string into ephemeral public artworks, Chambers seeks to reconnect communities with their environment in the wake of local and global tragedy.

With each iteration of the project, Chambers re-uses the same spool of red twine. The colour red is often symbolic of blood, danger, and anger, and oppression – the word itself coined by early colonialists as a racial slur against Indigenous peoples. But red can also represent courage and love, the primary focus of Hope and Healing Canada.

Beginning the morning of Wednesday, October 13, Chambers will install her work in the green space surrounding McIntosh Gallery after which it will be documented and disassembled, leaving no waste behind. Throughout the day, passers-by are encouraged to engage with the artist, pause and reflect, and share images of her process using #hopeandhealing.

About the Artist:
Tracey-Mae Chambers grew up as a stranger to her own story. At an early age, she was adopted and re-named, grafted into a new family tree. It was only into adulthood that her Métis culture was revealed, setting her on a new path of rediscovery. Today, the artist’s identity as an Indigenous heritage woman coexists with her interest in the natural world, both of which inform her creative practice.

Chambers’ work can be found in numerous public and private art collections across North America and Europe. She has been awarded several artist residencies, including the Artscape Gibraltar Point Residency in Toronto. Chambers is a proud member of the Métis Nation of Ontario, and her ancestors are from the Drummond Island community. She currently lives and works in Hamilton, Ontario.